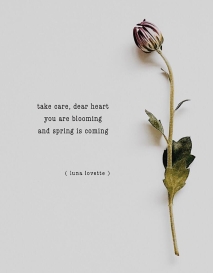 “You were not buried; you were planted. Bloom.”

I stopped writing 6 months ago when an attempt to write a post about anger became this open, gaping wound that would not stop bleeding. I kept trying to stop the ick that poured from my fingers onto the keyboard and bring it full circle to some epiphany of being bigger than my anger. Hard to write about what isn’t true. I’d thought long and hard about writing a blog and felt like a total failure; a couple of posts in and I threw in the towel – screams “Warrior”, right?

I loved the idea of connecting with people and bringing stuff most people find it difficult to be open about into the light of day, so I took to “blogging” on Instagram. Not the worst idea. It was a platform to share the stuff that spoke to me and I could interact with whoever chose to take some time to read my posts, which were limited in length by Instagram’s parameters. It was working well, as long as “well” includes becoming obsessed with how people are reacting to what you’re writing which leads to an increase in the amount of time you spend on social media. How bad could that be? I mean it’s not like I had an unresolved “anger” issue that was constantly bubbling just under the surface and fed by the “awesomeness” that humans will bestow, from behind the safety of a keyboard, on other humans with no regard for how the reader might take it. I used my job, volunteer obligations, kids, community and anything else I could think of as reasons why taking a big step back from social media just wasn’t possible. The truth was I needed it. I needed to know I was heard and seen and accepted. Likes/comments/follows served as the validation my “younger me” was still craving. 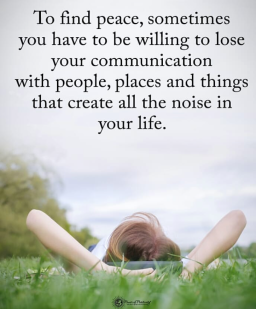 I love Jesus and trust Him to fulfill every last need I have. Except this one. There is this piece of me that the Enemy knows I struggle to believe Jesus could forgive, much less fill with something other than self-loathing. So I spent the last 6 months or so, “blogging” the words that I needed to hear each day and got sucked into the “Thank you so much for posting this.” and “Love your honesty and courage.” But even the adoration for being brave wasn’t taking care of this insatiable need for being heard/respected/cared for/accepted/protected. The story of an ice skating champion taking his life followed by a group of high school students being less than the best versions of themselves and subsequently vilified was more than I could take. So I quit social media. I figured out a way to still keep “business” commitments active, wrote a “taking a break post”, logged out, deleted some apps and made it so that getting onto platforms would take some extra effort. 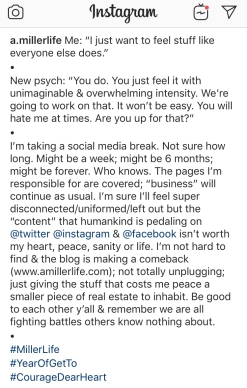 It’s been less than 8 hours. I’m still here. One of the few people who knows every single one of my secrets (and still loves me even though I have given her 1,000,000 reasons to give up on me over the last 30 or so years) sent a text to say that if I needed to feel connected while I “detoxed” she was there. I’ve resisted a plethora of urges to log on. I’ve cleaned my desk. Made a fantastic to-do list for the coming week. Only lost it once (it was over chocolate chip cookies so don’t give me too much credit). Finished our long overdue “New Year” card. Took Jackson to the gym and waited while people all around me were doing things I’ll likely never do again; no tears, no anger – maybe a little frustration but there’s a big difference between being bent and being broken. I’m used to “broken”; looking forward to giving “bent” a test ride.♥