Today marks my 46th year on this earth and it is only by the grace of God that I am here to celebrate it. 30 years ago I made my first unsuccessful suicide attempt; using the word first makes it pretty clear that there was more than one. While I may have been done with life, God clearly was (and is) not done with me. I love birthdays, well other people’s birthdays, but not so much my own for many years. My parents always did amazing things, my friends were always sure to celebrate me but there is something about wanting your time on earth to just be over (and yet it just refuses to be) that makes one really not care much for all the celebration. But then I became a mama and suddenly I had a husband, who picked the broken, icky, and scarred me to do life with, and these two little people who wanted to celebrate mama. With each passing year, I became a little more proud of clawing my way through another year of beating back the demons that wore me out each day.

“But you will receive power when the Holy Spirit has come upon you, and you will be my witnesses in Jerusalem, and in all Judea and Samaria, and to the farthest parts of the earth.” (Acts 1:8)

6 years ago, on my 40th birthday, I was baptized and then had the honor of baptizing our boys. I was raised Catholic, so I was baptized at birth, but this was my decision and a way to say “yes” to what my parents had intended when they had me baptized 40 years earlier. To say it was an incredible day is a serious understatement. Turning 40 is supposed to be a day of dread for women; a day that marks all you haven’t managed to accomplish in life and there I was, in a pool on a gorgeous spring day, getting washed clean and “starting over” and then getting to pass on being reborn to our boys – nothing better than that!

“I knew you before I formed you in your mother’s womb. Before you were born I set you apart and appointed you as my prophet to the nations.” (Jeremiah 1:5)

I am a prophet by no means but I absolutely believe that He knew exactly who He wanted me to be long before May 20, 1972. There is no possible way any human could orchestrate all that had to happen for me to get to this day. Add in all that had to happen to get my husband and my tribe to be in the “right place at the right time” and it isn’t hard to know why I often say “God doesn’t do coincidence.” That tribe not only refuses to let me quit, but reminds me, when I am on my knees and begging for it all to stop, it is then that He is preparing me for something. I’m still working on being a willing participant in said preparations but He doesn’t seem to be too interested in whether or not I like His plan! 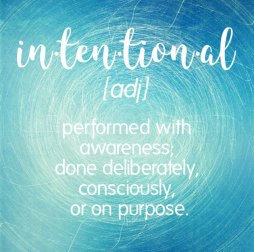 My resolution for 2018 was a single word: intentional. 2018 has been a really tough year, primarily from a physical pain point. When that pain got to a point that I had to start making decisions about what I could and couldn’t say “yes” to, the idea of being intentional took on an entirely new meaning. So on this day, when my 46th year of life is being celebrated, I’m taking time to realize just how far I have come and excited about what comes next. This blog is sort of a birthday gift to myself because the more of my story that I share, the more I own it rather than it owning me. I may spend the rest of my days writing just for me but my hope is that someone reads these words and gets a little more brave about sharing their own story. Maybe someday we will have a world of brave warriors telling shame to take its seat in the back of the room but I’d settle for someone simply standing up, on the day that Jesus calls me home, and saying “Amy made the most of her ‘dash’ and we can all be certain that her Daddy welcomed her with the words ‘Well done, My good and faithful servant – come take your seat at My table.'”